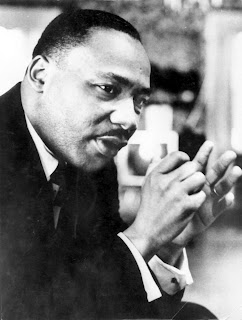 Today would have been Dr. Martin Luther King Jr's 80th birthday had he not been taken away from us on April 4, 1968.

If he were alive today I think he'd be happy with some of the progress we've made in integrating ourselves into American society. We're about to inaugurate an African-American president. ,We have made major progress in getting Black people elected to positions of political power and even have a few breaking ground in corporate America and other fields.

But Dr. King would also note that we have a long way to go before we can even say that a color-blind society is a reality. We still have problems with racism, inequality and poverty in this nation. He would probably decry our involvement in Iraq just as he would condemn the violence happening in our neighborhoods and terrorism around the world.

And, based on what his late wife Coretta has stated, Dr. King would not be a fan of people like his own daughter Bernice and other ministers who seem to think it's okay to hide behind scripture and hate on GLBT people.

This world and America itself would have been a much better place had Dr. King been around to share his wisdom with us for the last 40 years.

What we can do is study his writings that he did leave us, thank God for the time that he did walk amongst us as an inspiration to African descended people and others around the world, and strive to in our own way to make this world a better place for all its inhabitants.
Posted by Monica Roberts at 12:01 AM