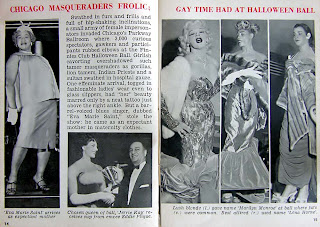 One of the beauties of surfing the Net is that from time to time, you'll stumble across a nugget of history or some photo that you weren't even aware existed.

I've mentioned that JET, EBONY and the now defunct HUE magazines when they first started back in the day served as historical chroniclers of the Black experience in America. Google just negotiated a deal in which they will be digitizing pre-1960's EBONY and JET magazines so that you can access their content on the Net.

One of the things I discovered to my delight is that in order to fulfill their mission of documenting the Black experience, EBONY and JET also covered events and discussed Black GLBT issues.

In addition to asking pointed questions about the Black GLBT experience, they also covered the New York and Chicago drag balls as well. 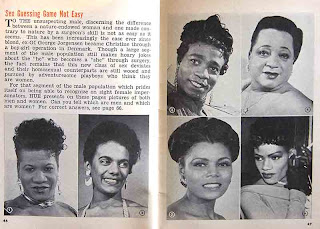 Most of it is the coverage of Chicago's Finnies Ball and the New York ones. I chuckled when I saw the HUE article that asks if you can tell the difference between female illusionists and genetic women.

I also noted the incorrect pronouns and the 'her' in quotation marks used in some of the articles.

While it was atrocious in the 50's, I noted that by the 70's, JET was doing a better job of discussing transgender issues with accuracy and sensitivity two decades before the AP Stylebook guidelines even were published. 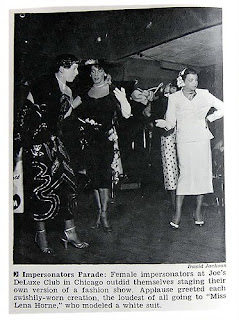 But unfortunately some of the attitudes reflected in those articles are still expressed by some of my people.

Some of my peeps think that me and my fellow transpeople aren't serious about this path we're taking, or think it's a joke.

It's serious business. Why would anyone subject themselves to the amount of ridicule, physical violence and abuse if they weren't serious about this?

The other fallacy that keeps popping up is that Black transgender people are a new phenomenon. These articles dating back to the early 50's and the history of the Harlem Renaissance say otherwise.
Posted by Monica Roberts at 1:38 AM

Awesome! Won't it be more so if you unearthed black trans history that dates back to the slave trade? I'm sure that will prove to be powerful stuff to read.

The blackcommunity needs to start being more inclusive in its approach. I have said many times that someones sexuality or gender does not make them any less black. In fact it is these very issues that make them all the more vulnerable. I would love to see more of this history reclaimed and honored. These are our people and blacks need to start to claim ownership loud and proud.

Ladies,
You're right. We are not 'throwaway people', and anyone who thinks so is sadly mistaken.

what an incredible article and what insightful photos to boot monica!! if only some of our major black media sources could get back on the right track of diversity!

Zoe,
Sometimes our people can be the most loving and supportive and others can be such unenlightened jerks.

Our AA media has had its ups and downs, but most of the time they get it right.