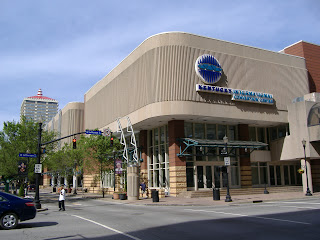 Downtown Louisville to be precise. About to jet out of the house and make a short run to downtown Louisville and the Kentucky International Convention Center to watch Dawn compete in a major fencing tournament here.

The NAC D is one of eight major fencing tournaments for competitive fencing in the United States. For US based fencers wishing to represent our country in the 2012 London Games, this is a first step to making the national team from which our Olympians will be chosen.

The competition will be fast, furious and high level.

I'll tell you how she fared when I get back.
Posted by Monica Roberts at 7:08 AM