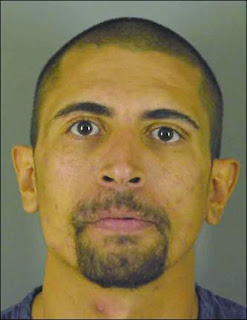 Allen Andrade's murder trial doesn't start until April 14, but even while in jail he continues to rack up additional charges.

Recently a Weld County Sheriff's Office affidavit, after a fight broke out between two inmate, a correctional officer issued a 'lock down' order. Andrade wasn't involved in the fight, but approached it. He ignored two orders to lock down and because he did so, was charged with engaging in a riot in a detention facility, a felony, and obstructing a peace officer, a misdemeanor

The murder trial for Angie's accused killer is expected to last two weeks, and let's hope and pray that justice is done.
Posted by Monica Roberts at 9:36 AM