You Can Call Him Senator Franken 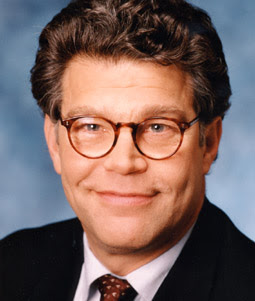 If anyone ever regurgitates that tired 'my vote doesn't count' line as their excuse for not voting, point to this race.

After counting 933 absentee ballots excluded in error over the weekend, Al Franken's lead grew from 49 votes to 225.

Since there are no more outstanding ballots left to count, the Minnesota state canvassing board, which oversees the ballot process, is scheduled to meet today and formally declare Franken the winner today or tomorrow.

Of course, Norm Coleman is going to file suit asking for a fresh count, but since the new Congressional session starts this week, Franken could be seated as Minnesota's senator on an interim basis until the matter is resolved.

If it holds up, that increases the Dems Senate majority to 59 seats, one short of the magic 60 seat mark.
Posted by Monica Roberts at 2:18 AM

Yes! We are so close to the mark! I read either in the Washington Post or MSNBC.com that the Republican leadership is thinking of giving Coleman the RNC chairmanship if he can't win MN. I don't understand. He failed to go the distance in the end. He has come out looking worst in this situation than Franken (though IMO it was a huge mess altogether.) Why would you want this situation to be the face of a party already marred by failures this election season. If I were a Republican (haha!) I would want someone who had actually managed to get a win of some sort as my leader. Like...drawing a blank, drawing a blank. j/k. I'm wrong I know.

Jo Jo,
The Repugs are busily setting themselves up for failure in 2010 and 2012. They seem to think that because they weren't more right wing they lost.

I'm also happy to see that the Dems are going to do something I've advocated the do a long time ago...take Texas away from the Republicans.