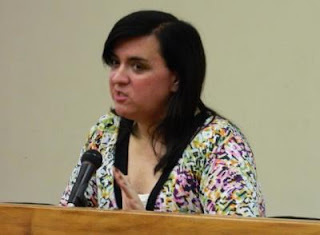 If Diane Rodriguez fails in her bid to get elected in Ecuador, then the opportunity to become the first open trans legislator on the South American continent would fall to Valentina Verbal.

Verbal is a trans activist and coordinator of the trans commission at the Chilean LGBT rights organization Fundación Iguales, and has surprised people in that nation by attempting to make this historic bid for office with the National Renewal center-right party.   It's a party she's been a member of since her youth and she defended her choice a post on her blog.
Verbal if elected in the November congressional election said in a Santiago Times interview that she intends to work for changes in the laws that affect trans people in her nation.


'We have to change the law that recognizes the sexual identity of transgender people without the state obligating them to have an actual sex change,' Verbal said

Chliean trans activists have observed what happened in their next door neighboring nation of Argentina, and have been pushing for a similar Gender Intetitly law in their nation.  .There's also positive momentum on TBLG rights issues with the recent passage and signature into law of hate crimes legislation that covers gender identity and sexual orientation.

We'll find out in November if Valentina makes history in her nation and internationally.