Police Women Of Dallas Is Back!

Normally I run far away from any reality TV show, but one which caught my attention and became a much anticipated guilty TV pleasure for me was Police Women of Dallas.  It was on TLC back in 2010, but now has moved to the Oprah Winfrey Network. 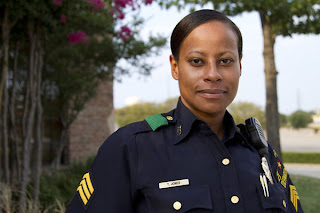 I fell in love with Sgt Tracy Jones on the original show to the point I follow her Twitter feed.

Well, she's back in the 2013 edition, but there are three new officers they are following in this edition which premiered on January 25.

The new DPD officers whose exploits they are chronicling in addition to Sgt Jones are Senior Corporal Cheryl Matthews, Detective Angela Nordyke, and Officer Yvette Gonzales.

The series follows the officers as they do their jobs fighting crime in Dallas and also gives you a peek at them balancing it with their personal lives.

The peek at Officer Gonzales' life was very interesting, especially when I watched the episode in which they introduced us to her partner of eight years who she had just proposed to.  .

They are engaged, but haven't set a date yet.

It's now moved to Friday nights on OWN, and I'll definitely be checking it out until it's over. .