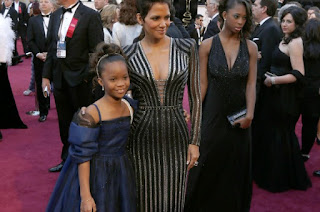 Every now and then, despite me being more than aware of the Black Unwoman Meme constantly being aimed and deployed against all Black women cis and trans from birth throughout their lives, even I get shocked at times of just how low whiteness and white supremacy can go with it.

I'm usually ignoring Oscar night, but was paying attention because young Quivenzhane Wallis was up for a Best Supporting Actress for her role in the movie Beasts of the Southern Wild   I was shocked and angered to learn that the satrical paper The Onion had this to say about Quivenzhane. 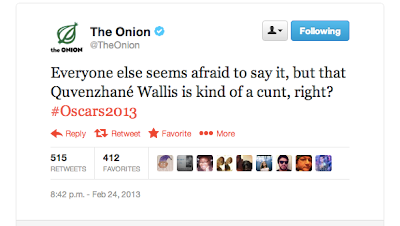 It's Maya Wilkes time....What the hell is the The Onion doing (or whatever fool was tweeting for it last night)  calling an African-American 9 year old girl the c-word?

What the frack is wrong with you?  Did you ever aim that word at white female child stars such as Dakota Fanning?   So why would you ever think it's appropriate to do so at a Black girl?.

We are talking about a 9 year old who not only had this disgusting tweet aimed at her, but was also on one of the biggest nights in her young life made the butt of a tasteless Seth McFarlane joke.

And I do not want to hear or see any comments trying to justify this BS, claim what The Onion did was 'just satire',  'nobody complained when (insert name of white actress) was called that disgusting term", or we're 'suppressing 'free speech' when we call. out this BS.

Free speech has consequences and is a two way street.   Calling any woman the c-word is not a joke   Just as whoever wrote that tweet has the right to say it for whatever mind-blowing reason they did so, they can't expect a community who has been dehumanized on a regular basis for over 400 years to sit silently when one of their daughters is disrespectfully attacked.


TransGriot Note: Renee of Womanist Musings not only her own commentary up about this, but has started a Change.org  petition to demand The Onion apologize for the reprehensible tweet.  Just deleting it and hoping this will blow over is not enough.

TransGriot Update:   The Onion's CEO has issued an apology to Quvenzhane Wallis.
Feb. 25, 2013
Dear Readers,
On behalf of The Onion, I offer my personal apology to Quvenzhané Wallis and the Academy of Motion Picture Arts and Sciences for the tweet that was circulated last night during the Oscars. It was crude and offensive—not to mention inconsistent with The Onion's commitment to parody and satire, however biting.
No person should be subjected to such a senseless, humorless comment masquerading as satire.
The tweet was taken down within an hour of publication. We have instituted new and tighter Twitter procedures to ensure that this kind of mistake does not occur again.
In addition, we are taking immediate steps to discipline those individuals responsible.
Miss Wallis, you are young and talented and deserve better. All of us at The Onion are deeply sorry.
Sincerely,
Steve Hannah
CEO
The Onion