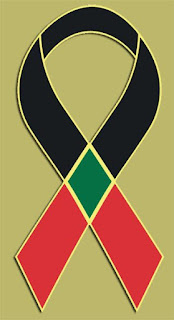 Today is the 13th annual National HIV/AIDS Awareness Day.  As someone who has lost two extended family members and many dear friends to the disease, I'm keenly aware of the toll HIV/AIDS had taken on this community.

It was started by the Centers for Disease Control and other grassroots  organizations in 2000 and launched as part of a widespread effort to curb the rate of HIV infection amongst black men and women through “education, testing, involvement, and treatment.”

And sadly, embedded in those statistics are Black trans people.  The Injustice At Every Turn report revealed that 20% of the 381 African American trans respondents to the National Transgender Discrimination Survey  reported being HIV+ and an additional 10% reporting they did not know their status.   There are some major advances that have been made in the fight to defeat HIV/AIDS, and health officials around the world are optimsitic that it can be defeated.

HIV+ infected people are living longer due to netter treatment regimens, more testing despite political interference that catches the disease earlier, and just last month a Spanish research team announced a major medical breakthrough that could lead one day to an effective vaccine against the HIV virus.

But until that glorious day happens and there's a cure for AIDS,  we need to do a much better job of getting our people informed about HIV, getting them tested and making sure people know their status.  It's the only way at the present time we are going to reduce infection rates and eventually eradicate it.