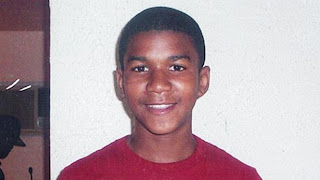 If it weren't for a February 26 encounter with an armed bigot named George Zimmerman, Trayvon Martin would be spending today enveloped in the love of his family, girlfriend, and closest friends celebrating his 18th birthday.

But instead he's six feet underground and the idiot responsible for it is trying to hide behind Florida's ALEC and NRA sponsored Kill A Black Kid With Impunity Stand Your Ground law.

I didn't appreciate seeing this racist tweet from South Carolina Republican (who else?) Todd Kincannon conflating Trayvon and his opinion of Sunday's Super Bowl.   Thanks Wonkette for your commentary on it and thanks TransGriot reader Jason Byrd for bringing it to my attention.

A Southern conservative saying he needed to be put down like a rabid dog?  And you wonder why your party and conservatism in general has only 6% support amongst African-American voters if that much.   .

Racism has spread and metastasized inside the GOP body politic and the festering infected boils on the body surface of it need to be lanced in the 2014 election cycle.

Political rant over.  Time to get back to talking about Trayvon.

Yeah, you conservafools can continue to try to deny it until the end of time, but this Martin case has been about race ever since Trayvon had the misfortune of running into Zmmerman as he returned from his fatal late night run to the store to get Skittles and iced tea.

People may wish to say a few words of prayer for Trayvon's parents Sybrina and Tracy, his family, his girlfriend and everyone else who loved him.  Their family will definitely be feeling his loss and need every ounce of strength they can muster to get through this day.