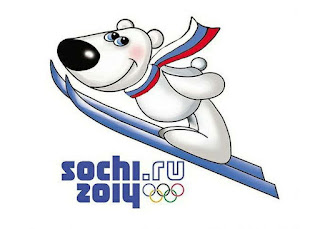 One year from today will be the initial day of competition in the XXII Winter Olympic Games in Sochi, Russia which will run from February 7-23.

Russian President Vladimir Putin will be on hand to greet the estimated 10,000 athletes coming to the Black Sea resort city of 343,333 residents for the two weeks of competition.

The Sochi games Olympic venues will have two clusters.  The Sochi Olympic Park by the Black Sea will contain the two hockey arenas of 7,000 and 12,000 seat capacity, the 8,000 seat speed skating oval, the 3,000 seat curling center, a 12,000 seat arena for the short track speed skating and figure skating competitions, the Olympic Village, the Olympic Broadcast Center and the 40,000 seat Olympic Stadium.

The town of Krasnaya Polyana that is 60 km (37 miles) from Sochi will have the Mountain Cluster of venues.  In addition to an Olympic Village for the athletes participating in the Mountain Cluster of events, theres the Rosa Khutor Alpine Resort, Freestyle Skiing and Snowboard Park, the Biathlon and Ski Complex,  the Sliding Center Sanki, and the RusSki Gorki Jumping Center.

We will get to find out in 365 days who wins the medals in the 98 events in the 15 sports contested during those games   But today we will segue to our usual TransGriot Friday business of determining what fool, fools or group of fools exhibited Olympian levels of stupidity, ignorance or jaw dropping hypocrisy.

Our Bronze medal winner is an early 2013 Shut Up Fool of the Year contender in the person of the NRA's Wayne LaPierre.  All is not good in Wayne's World these days as he got called out by FOX News Chris Wallace on Sunday and the NRA's rep as the most powerful lobbying org on Capitol Hill looks more and more specious by the day.  Wayne's also sounding desperate and more unhinged as momentum builds in the US for comprehensive common sense gun regulation his gun manufacturing paymasters don't want.

Our Silver medal winner is one of our regular Shut Up Fool of the Year contenders fools in Rep Virginia Foxx (R-NC).  She parted her lips to paraphrase pastor Martin Niemoller and compare the proposed regulation of for profit colleges that lined her purse with $48,668 of campaign contributions last year to the Holocaust.   but hates on people that take out student loans to complete their education.  Many of them incurred that debt by taking classes at those more expensive for profit online schools. 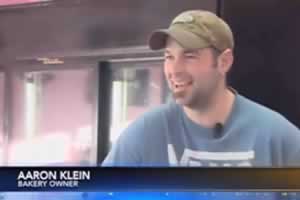 Our Gold medal winner this week is Aaron Klein, the bigoted owner of Sweet Cakes By Melissa in Gresham, OR.  He and his wife forgot the state has a non discrimination law and refused to bake a cake for a lesbian couple's upcoming wedding.

After he got called on his homophobia in the local media and on the Net, he let loose some comments on the shop's Facebook page that also showed he hates more than just gay peeps.

Dude, you can delete your Facebook page, but the Net is forever.  Your bigotry is still preserved despite your failed attempt to sanitize it.   You're also about to find out bigotry is bad for your business and expensive to your wallet.

And oh yeah, one other thing. Aaron Klein, shut up fool!