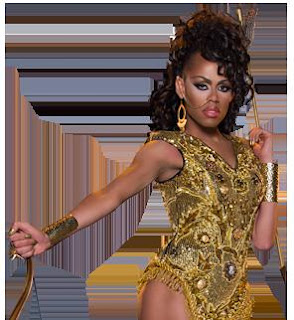 I thought I had it tough when I came out as trans nearly 19 years ago and transitioned in the middle of an international airline terminal.   But to do so in front of a national television audience is infinitely tougher.

My homegirl Isis King can talk about the experience of competing on a reality show while trans along with Laverne Cox and Jaila Simms.

That small sorority is about to get a new member in Monica Beverly Hillz..

The RuPaul's Drag Race contestant came out as a trans woman during the February 4 episode of the show I refuse to support.

While there have been two other contestants in the history of that show, Sonique and Carmen Carrera who have come out as trans, they did so after they completed their competitive runs  Monica is the first to do it while competing.on the show..

It also adds an exclamation point to something I've been saying on this blog for years and the pseudo cisprivilege chasing TS seps claim is a lie or impossible.  There is movement in the trans umbrella amongst the gender variant categories.  I also pointed out in a post that some peeps use the drag and pageant world as a way to facilitate their transitions.

And it looks like this is exactly what it happening in Monica's case.

Hmm.  I may have to reconsider watching this show to support my trans sister.
Posted by Monica Roberts at 12:00 AM