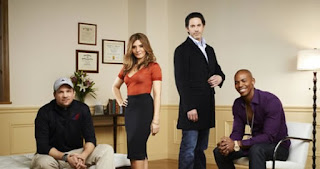 I'm a big fan of the USA Network cable show Necessary Roughness, which follows the exploits of Dr. Danielle Santino who is hired by the fictional New York Hawks team to handle their mental health issues and eventually becomes a renowned sports psychologist.

Callie Thorne's Dr Dani character is based on the real-life story of Dr. Donna Dannerfelser, who was hired by the New York Jets as their mental health specialist.

In last week's episode setting up tonight's season finale Callie Thorne did an anti-bullying PSA for GLSEN that was put together with the help of GLSEN's Andy Marra.  .

In tonight's finale, the Hawks players who is about to come out of the closet is the team's starting quarterback.  It's going to be interesting to see how this affects the team chemistry, especially since the Hawks are chugging along with a 7-2 record and there were already some phobic remarks being tossed around in the Hawks locker room..

It's also ironic that the same quarterback who was less than supportive of star wide receiver Terrence 'TK 'King when he was going through his struggles, is now in the position of having to ask TK to have his back as he tries to come out of the closet.


While that hasn't happened yet, the odds are that we have already had or have playing right now NFL players who are in the closet.  It  is only a matter of time before this fictional coming out becomes a reality.

We'll see what happens on Necessary Roughness at 9 PM CST  when this show airs how it plays out.