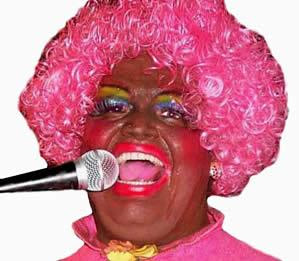 Nephew sent me word about the latest Chucky sighting when it was announced at a gay bar in the Portland neighborhood in Louisville that thankfully got protested and shut down once again to the usual howls of protest from his vanillacentric privileged gay enablers of racism fans.

I've been slamming his plump rump since 2002 along with his enabler RuPaul.  I decided to focus my attention elsewhere and let other people call his racist blackface drag 'show' out.

Well, in addition to the gang in Louisville doing precisely that, the editrix at The Perverted Negress wrote a post entitled 'NEWSFLASH! Blackface Still Racist Y'all stating the obvious.  The post also has this commentary video that definitely needs a signal boost.

Pedantic sidenote, but it was a bar on Lombard in Portland, OR--one of the bigger gay bars in Portland. Or maybe Chuck got shut down in Lousville, too? That'd be nice.