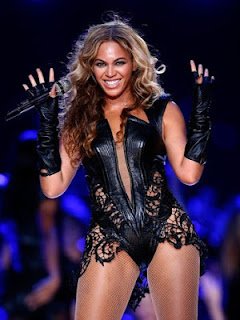 Now rushing to jump on the 'hate on Bey Bey' bandwagon, the racist fools at PETA.

Seems like the PETAoids had a problem with my Houston homegirl's outfit she wore (and wore quite well) during her Super Bowl concert.    They're also mad at her along with the Friends of Animals group because she wore a mink coat during President Obama's second inauguration.

People Eating Tasty Animals PETA had this to say about the outfit created by New York designer Rubin Singer that consisted of a cropped leather motorcycle, matched with a leather bodysuit made with strips of python and iguana.

"We would take a bet that if Beyoncé watched our video exposés ... she'd probably not want to be seen again in anything made of snakes, lizards, rabbits, or other animals who died painfully," PETA said in a statement. "Today's fashions are trending toward humane vegan options, and Beyoncé's Super Bowl outfit missed the mark on that score."

As if anyone besides Bill O'Reilly cares what y'all have to say about anything.  The African-American community stopped listening to your racist behinds a long time ago because it seems like every time we turn around, you're either making some foul racist comment, disrespectfully appropriating our history or attacking our iconic celebs from Janet Jackson to the Queen of Soul

And frankly, I don't think Beyoncé cares what y'all think either.
Posted by Monica Roberts at 7:00 AM

PETA did the same thing with Mary ask meJ. Blige a few years back. When someone threatened to throw paint on her mink coat, she responded that there would be a problem. I was with her on that. PETA has no right to dictate to anyone what to wear. They are another organization that I don't give a penny to. Very racist, antagonistic, and psycho if you