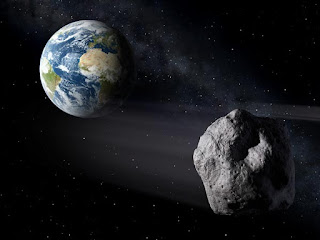 At 2:24 EST today an event will take place unprecedented in recorded human history.

That is way closer than our communications and weather satellites parked in geosynchronous orbits 22,000 miles above our planet.

The asteroid is 45 meters across (150 feet) but if the calculations of astronomers are off and it struck it would be a real bad day for the peeps on that side of our planet.

Scientists calculate if 2012 DA 14 made impact it would have the explosive power of a few megatons of TNT and cause localized damage similar to the 1908 Tunguska Event.

That was an airburst explosion which flattened about 750 square miles (1,200 square kilometers) of a thankfully remote Siberian forested region in what is now northern Russia.

NASA and other international space agencies are tracking the space rock in order to calculate its precise orbit and add it to the 9500 asteroids it is tracking with diameters of half a mile (one km).

And speaking of calculations, hope the astronomers were right .

TransGriot Update:  If you have a good pair of binoculars and live in Asia, Australia and eastern Europe, you'll be able to see 2012 DA 14.
Posted by Monica Roberts at 12:00 AM