Muppets Of The World Unite-Fox Thinks You're Communists

In the latest example of conservafool idiocy,  Fox Business 'News' commentator Eric Bolling put his foot in his mouth as usual and declared that the latest Muppet movie was an attack on the oil industry and capitalism.

Bolling's got his draws in knots because Miss Piggy isn't capitalist swine enough for his conservatastes.   .

He made the ludicrous assertion that the new Disney installment of the “The Muppets” franchise was evidence of a liberal Hollywood conspiracy to brainwash children.

Well, can't help it if truth has a liberal bias homes and Miss Piggy is not capitalist swine enough for this corporations are people too conservafool.  But I digress. 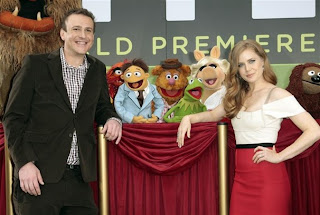 The film features an evil oil baron played by Chris Cooper named Tex Richman who wants to raze the Muppets’ old theater so he can drill for oil. The gang reunites to host a major fundraiser to win their theater back. Bolling saw it as an attack on the oil industry and capitalism.

Really?  Now I definitely have to make time to go see this movie since it's pissing you conservafools off.

So tell me Eric, when is the Muppet Manifesto coming out?   Where can I pick up a copy of Elmo's Little Red Book?  Are they going to Havana to film their next movie?

Muppets of the World Unite!
Posted by Monica Roberts at 8:00 AM