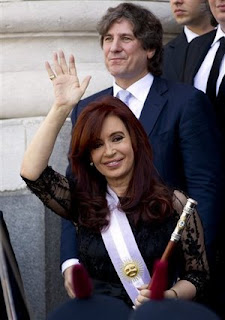 Political history was made not only in Argentina but in Latin America as well yesterday as Argentine President Cristina Fernandez de Kirchner was sworn in for her second term in a ceremony attended by female Brazilian President Dilma Rousseff; the presidents of Bolivia, Chile, Guatemala, Honduras, Paraguay and Uruguay.

She is the first female leader to be reelected in Latin America and blew out her nearest challenger, Hermes Binner by a 37 percentage point margin.   It was the largest margin of victory in an Argentine  presidential election since Juan Peron won with 62% of the vote in 1973.

It wasn't an easy day for her as she remembered her late husband, former Argentine president Nestor Kirchner after accepting the wooden presidential baton decorated with a gold-and-silver version of Argentina's national shield.

Fernandez remarked, "This is not an easy day. ... Despite the joy, there is something and someone missing." 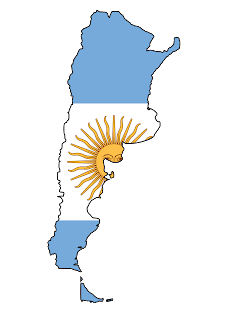 Her second term expires in 2015 and she has pursued economic policies that have largely isolated Argentina from the economic woes other nations are experiencing.

We've also witnessed social progress in Argentina as evidenced by the Gender Identity Law now winding its way through the Argentine Congress and the resumptions of prosecutions of officials responsible for human rights violations during the Argentine military dictatorship that lasted from 1976-1983.

Here's hoping that she has continued success in leading Argentina and being a role model for future leaders, male and female in her nation and beyond its borders to follow.
Posted by Monica Roberts at 2:00 PM