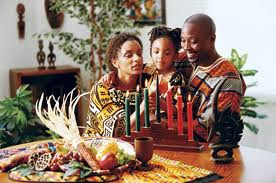 TransGriot Note:  On each night of the 2011 Kwanzaa celebration, just as I did last year, I'm going to write about each one of those principles and explain how it applies to the chocolate trans community and our cis African descended brothers and sisters.

Ujima (Collective Work and Responsibility): To build and maintain our community together and make our brothers' and sisters' problems our problems, and to solve them together.

It's time to light the third candle on the Kinara and ponder the third principle of the seven celebrated during Kwanzaa.

Ujima.  Collective work and responsibility.  I saw strides in our cis brothers and sisters recognizing that the Black trans community's problems were their problems as well as I and others have been stating for years.

As for movement toward a coordinated partnership toward helping us solve them, we're getting there.

As I've said repeatedly, we Black transpeople can't help do our share of the collective work needed to uplift the race if our lives are unstable because we can't get jobs or people refuse to hire us because they can discriminate against us because of virulent anti-trans bigotry.  .

Our problem of battling anti-trans bigotry and oppression that deleteriously affects us is an African-American community problem as well as the NTDS survey pointed out.