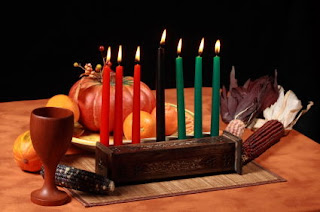 TransGriot Note:  On each night of the 2011 Kwanzaa celebration, just as I did last year, I'm going to write about each one of those principles and explain how it applies to the chocolate trans community and our cis African descended brothers and sisters.

It's time to light the second candle on the Kinara and ponder the second principle of the seven celebrated during Kwanzaa.

Kujichagulia.  Self-Determination.  It's one of the principles in 2011 I observed us making major strides in chocolate trans world in terms of achieving it since I composed last year's post

One of the things that made 2011 different was that we had more trans people of African descent coming out and speaking their truths and lived experiences about us and our lives.  Whether it was Janet Mock or Kylar Broadus, myself, Laverne Cox, Isis King or countless others, we've been more forceful about living up to the kujichagulia.principle not only in our own lives but for our chocolate trans community.

We've also been more active in creating space and combating the negative stereotypes associated with being Black and trans, but we still have much work to do.  This is also a principle we can draw motivation from as we seek to build stronger and closer community ties with our cis African descended brothers and sisters.

As I will continually remind you Black cis people who hate on us, I and my trans brothers and sisters did not give up our Black Like Me cards when we transitioned.  We are still dealing with the same systemic bull feces aimed at African descended people that we have dealt with since birth and transition didn't change that.

And because I and my brothers and sisters transitioned doesn't make us any less Black, nor does it give you haters carte blanche to kill us either because you irrationally hate us.   The fact that we did transition to be the Black men and women we are is a living example of the kujichagulia.principle