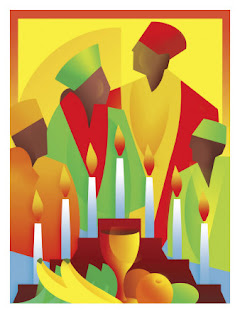 TransGriot Note:  On each night of the 2011 Kwanzaa celebration, just as I did last year, I'm going to write about each one of those principles and explain how it applies to the chocolate trans community and our cis African descended brothers and sisters.
***
Umoja (Unity): To strive for and to maintain unity in the family, community, nation, and race.

It's time to light the first candle on the Kinara and ponder the first principle of the seven celebrated during Kwanzaa.

Umoja.  Unity.  As I stated in last year's post, It's a concept we've been striving to achieve in our community over the time we have been Africans living in the Western Hemisphere.  That is no different for those of us who are African descended trans people.

And yes, it has been at times an elusive and frustrating as hell concept for us in the African descended trans community to grasp and achieve.  But in order for us to become a part of the greater society as Kwame Ture said, in order for us to own our power it is imperative that we close ranks, work it out amongst ourselves in family conversations and hopefully emerge a more powerful and stronger community on the other side of what will be an ongoing process.


One of the things I was most happy to see in the 2k11 is various elements in chocolate transworld coming to an epiphany that this needs to happen and soon.   TPOCC's emergence, the upcoming Black Transmen's Empowerment Conference event in Dallas, the Transfaith in Color Conference and the Philly Trans Health one are just some examples of the yearning for Black transpeople to own their power as Sharon Lettman-Hicks of NBJC would say.

Our haters don't want to see that happen, and will do whatever it takes to frustrate, delay and impede our progress toward making umoja a reality in the chocolate trans community

There were also steps taken by our cis African descended brothers and sisters in light of the horrific stats that came out during the summer pointing out how hard we have it .  Our cis brothers and sisters could no longer ignore the reality that they must do a better job on their end in including the chocolate trans community in its policy stances and organizations.

The NAACP made a highly publicized attempt to do so in a town hall meeting during it's 2011 convention that failed to include the bi and trans sectors of the community.  The NAACP and the chocolate trans world knows how much this needs to happen and no matter how frustrated we get with their missteps in the process, we must keep on pushing for that unity and inclusion to happen.

I've also been heartened to observe the greater desire amongst African descended trans people to organize, unite and build community on a local, state and regional level as well and get better connected with the communities we intersect with as well. .

Despite the odds and obstacles being put in our way, umoja will happen and it will pay great dividends for us once we achieve it and consistently strive to maintain it..