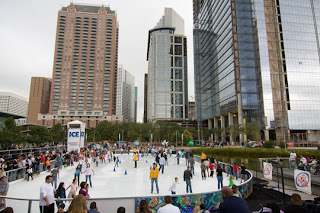 So while you peeps up north are shivering, tiptoeing along frozen sidewalks and shoveling snow, I'm walking around with short sleeves and a Cheshire cat wide grin and 60 degree temps.   We do however get reminders that it's winter thanks to cold fronts passing through the area that can drop the temps to freezing levels..

And nope, that's not photoshopped, that's the ice rink currently in operation from Thanksgiving to January 22 at Discovery Green, the 12 acre downtown park near the George R. Brown Convention center.

To continue with the holiday theme of this Shut Up Fool weekly awards post, let's get to our important 'bidness' of determining what fool, fools or group of fools deserve a lump of coal in their Christmas stockings next week. 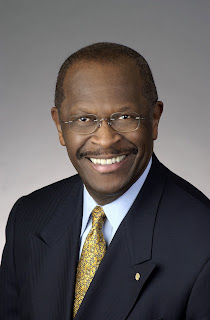 This week's winner is Herman Cain.

In an interview with Barbara Walters, he expressed the desire to become the Secretary of Defense.

Um Herm, that does require you to know a little something something about geography, the leaders of those various countries,.world geopolitics, and have a vowel and a clue about all the branches of our military and their various missions, issues you demonstrated an appalling and jaw dropping lack of knowledge of in your now 'suspended' presidential campaign.