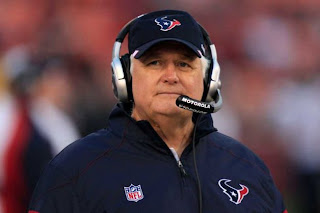 The 2011 AFC South Division Champion Houston Texans (yes it sounds so good to say that) are in Reliant Stadium kicking off in mere moments against the Carolina Panthers and number one overall pick Cam Newton.

The Texans will being going for their team record eighth consecutive win, trying to extend their season record to 11-3 and stay in the thick of the race for  the AFC first round playoff byes.

The number one ranked Texans defense will have their work cut out for them in trying to contain Cam Newton.  Their thoughts will also turn in the direction of the nearby Texas Medical Center as defensive coordinator Wade Phillips recuperates from gall bladder surgery he had on Thursday.

Just fits the theme of this special Texans season so far in the next man up.