Team USA Is Going To Canada!

The USA women's team on Sunday finished handling their CONCACAF business in PPL Park and captured their seventh title with a 6-0 rout of Costa Rica on the strength of Abby Wambach's four goals and another clean sheet by Hope Solo.

The Ticas aren't too disappointed.  They will be heading to their first ever Women's World Cup thanks to their showing in this CONCACAF qualification tournament in which they won their group and made it to the finals.

Oh yeah, did I forget to mention Team USA also qualified for next year's Women's World Cup in Canada in addition to winning the tournament?

That qualification business was handled when Team USA beat Mexico 3-0 in the semifinals on Friday to avenge that 2-1 loss Mexico pinned on them four years ago.

Speaking of Mexico, they will be going to the World Cup next year along with the Ticas after beating Trinidad and Tobago 4-2 in the Third Place game to capture the third CONCACAF auto qualifying spot. 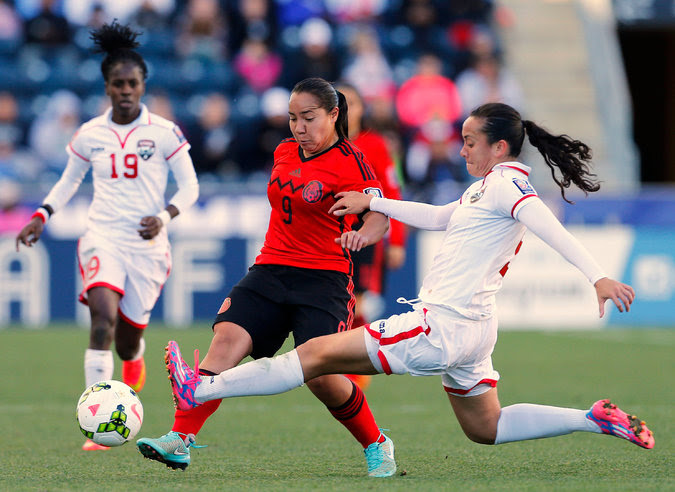 As for Trinidad and Tobago's heartwarming quest to make history and become the first ever Caribbean based female squad to make it to the World Cup, they will have to play a two leg aggregate score playoff against CONMEBOL rep (South America) Ecuador in order to punch their ticket to Canada.

Since the Mexican team plays their games at high altitude (7200 feet),the Mexican Football Federation has made the classy offer of a training facility in Mexico City to help Trinidad and Tobago get ready for that 9300 foot altitude November 8 first leg in Quito that awaits the Soca Princesses.   The return leg is in Trinidad and Tobago on December 2.

Congrats to Team USA and all the CONCACAF nations that will be playing next summer in Canada.   Hopefully Trinidad and Tobago will get to join that party.

And I'm hoping Team USA finally gets to add that third star on their jerseys next summer.
Posted by Monica Roberts at 12:00 AM