You know for me to miss Scandal, this had to be pretty darned important.

I  mentioned in a previous post that I had been honored with two 2014 OutSmart Readers Choice Award wins for Favorite Blogger (Female) and Favorite  Tweeter (Female).

Tonight at FBar was the event in which all the awards winners and finalists picked them up.  Since I was in need of a night considering the drama I've been through lately to put my nice clothes and other face on, I happily headed in that direction for the event that started at 7 PM . 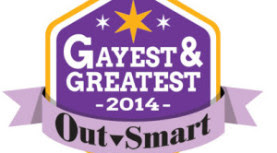 Didn't take me long after arriving at the venue before I started running into my Houston activist community peeps congratulating me for the multiple wins.

It was nice to have the acknowledgment was  of the community of the hard work I put into creating an informative blog and the activism I do to advance our human rights cause.