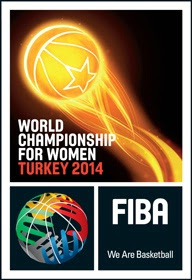 It was Semifinal Saturday in Istanbul earlier today as the four surviving teams in the 2014 FIBA World Championship For Women tournament faced each other for a spot in tomorrow's finals.

Spain was taking on the host Turks, while the unbeaten Team USA was tangling with their longtime Australian rivals who were also unbeaten despite not having Lauren Jackson on the Opals squad.

In the early semifinal game the European champions broke the hearts of the Turkish faithful dreaming of an appearance in the FIBA final by knocking them off 66-56.

Team USA handled their basketball business against Australia in the other semifinal, sending the Opals to the third place game to face off against Turkey after beating them 82-70.


Tina Charles did the damage this time with 18 points and 9 rebounds to put the USA one win away from repeating as FIBA world champs and qualifying for the Olympic basketball tournament in Rio two years from now.
Posted by Monica Roberts at 8:00 PM