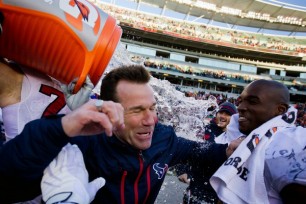 The regular season ended with me going 12-4 during Week 17 to finish the season with a 164-92 NFL game prognostication record for the year.

Not bad considering it's been a while, it was the first season I've done so since I started compiling this blog and with two weeks left in the regular season I was trailing Michael Watts by four games.

Mr. Watts also went 12-4 (no thanks to the Arizona Cardinals winning in OT) for us to remain tied. 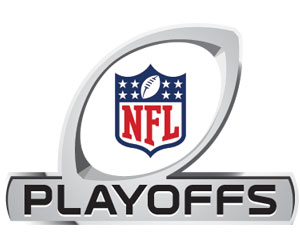 Now it's NFL playoff time as the race to see who gets to Indianapolis to play in the Super Bowl starts.  For the first time since they started play in 2002 my hometown NFL franchise is one of the teams involved

Here's Mike's thoughts on Wild Card Weekend and now who I'm picking for these games. 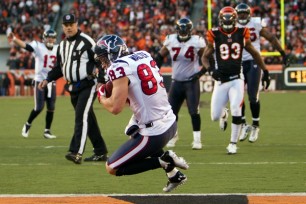 The 10-6 Texans have 12 players on injured reserve and have had key players and even defensive coordinator Wade Phillips miss games this year due to injuries.

We get Andre Johnson, offensive lineman Mike Brisiel and TE Owen Daniels back for this rematch of a game the Texans erased a nine point second half deficit and needed a clutch fourth quarter drive to win in Cincinnati.

And don't forget the Texans have the second best rushing attack in the NFL featuring RB's Arian Foster and Ben Tate to go with a stifling defense.

The Bengals surprised some people by finishing 9-7 and making it to the playoffs out of the rough and tumble AFC North. They got major contributions from wide receiver AJ Green, TE Jerome Gresham and rookie QB Andy Dalton.

Dalton is from the Houston suburb of Katy and won a state championship for the Katy Tigers and a bowl game as TCU's QB against my Cougars (arrgh) in Reliant Stadium, but he's facing the Number 2 defense in the NFL, was sick for most of the week and a raucous home crowd will be waiting in Reliant that the Texans players will be feeding off of in the team's first ever playoff game and the first for a Houston based NFL team since 1994.
.
The game will be another close nail biting affair for Texans fans, but the Texans win it 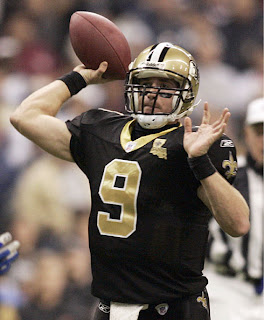 The NFC South champion Saints are hosting a Detroit Lions team making their first playoff appearance in the 21st Century.  The Lions have offensive firepower with a 5000 yard passer of their own in Matthew Stafford, Pro Bowl wideout Calvin 'Megatron' Johnson and a young improving defensive line anchored by Ndamukong Suh.

But can this NFC North runner up squad hang with the Saints prolific offense and Drew Brees, who passed for 5,478 yards and obliterated Dan Marino's NFL single season passing mark that had stood since 1984?

Mark Ingram may be out for this game, but the Saints still have a potent stable of running back headlined by Pierre Thomas and Darren Sproles to do all the stuff in the Saints offense that Reggie Bush used to, an outstanding receiver corps, a pro Bowl TE in Jimmy Graham and a defense that can get the job done.

Oh yeah, did I mention that the Saints are unbeaten this year in the Superdome?

So to answer the question I asked in an earlier paragraph.  Nope.   Saints will win this one. 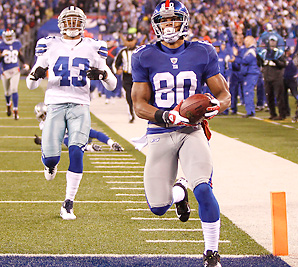 The hate has already been flowing this week between the Giants and Falcons and this game should be a fun one.

The 9-7 Giants may be the first NFC East champ to win the division with less than 10 games since the 1970 AFL-NFL merger, but they finished the season 3-1 and are playing well.

Granted, the 10-6 Falcons aren't chopped liver. They were the runner ups in the NFC South division and do have an explosive offense helmed by quarterback Matt Ryan, RB Michael Turner and their own outstanding wideout in rookie Julio Jones.

But Ryan is 0-2 as a playoff starter and their defense is suspect when you compare it to the Giants defense with players such as Jason Pierre-Paul, Justin Tuck, Antrel Rolle, and Mathias Kiwanuka.

You'll probably see wideout Victor Cruz doing the samba in the end zone at least once during this game with the NY Giants winning a close one.

The banged up NFL North runner up Steelers catch a break by playing the conservafools favorite team in the Denver Broncos, who backed into the playoffs and the AFC West title.   They have cooled off significantly since they went on a six game winning streak in the middle of the season chock full of miraculous come from behind wins that inflated the Tebow legend. 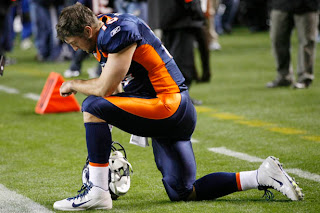 More props should go to the Denver defense anchored by Elvis Dumervil and Von Miller who played their butts off and kept the broncos in those games that ended with those miraculous comebacks.

Tim Tebow has flamed out against stiffer competition, and it ain't gonna get any easier with the Pittsburgh Steelers defense loading up the box to stuff Willis McGahee, blitzing him from every conceivable angle and spot on the field, daring Tebow to throw and making sure he stays in the pocket while doing so.

Ben Roethlisberger won't have Rashard Mendenhall to hand the ball off to since he's out with a torn ACL and he will be hobbling around on a sore ankle.  But he still has more offensive weapons to play with such as speedster Mike Wallace.

The Steelers barring some strange set of circumstances should get out of Colorado with a win.


Who do I like for the Super Bowl?   Green Bay and Baltimore are the best teams in their respective conferences on paper.   But that's why you play the games as Herman Edwards famously said.  We'll see if they're both at Lucas Oil Stadium on February 5.