The Baltimore County Council is considering a trans human rights law that once again, the opponents are trying to use the odious bathroom meme to kill

Bill 3-12 was introduced to a packed chamber and if passed would protect transpeople in the workplace, house and all together people, public accommodations

Back on December 6 the Howard County MD Council passed on a 4-1 vote trans human rights legislation that prohibits discrimination based on gender identity and expression in the areas of employment, housing, public accommodations, financing, and health and social services.

They were the third jurisdiction in the state of Maryland to do so after Baltimore City and Montgomery County.

Supporters of the proposed legislation along with the haters showed up in Towson, the county seat. The Forces of Intolerance were represented by Dr. Ruth Jacobs, the head of the Maryland Citizens Bigots For A Responsible Government and Derek McCoy of the Association of (Bigoted) Maryland Families to pimp their usual transphobic lies and fearmongering


JACOBS: It opens up the bathrooms to men who may be just cross-dressers, who may be a pedophile who uses the law to nefarious advantage. It’s a very dangerous bill. In this law, you’re afraid to complain because [you think] Oh my goodness — maybe I’ll be considered a bigot. But, of course it could be somebody who’s trying to rape me.
This takes away from a woman being a woman. Somebody else is just like you. These people are confused about their gender.

The bill is a direct attack on women’s privacy.

MCCOY: When you look at this bill, the terrible thing about it is you’re talking about allowing someone who self-identifies (as a man or a woman) — meaning I can get up any given day of the week, especially if I have inclinations that are not right, like being a pedophile or a sexual deviant — and putting in harm’s way children who are using public facilities. They can be taken, they can be molested. We need to be on our guard and understand what’s at stake. 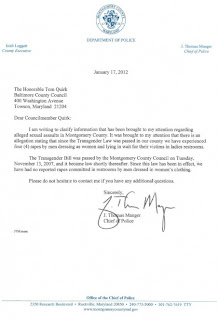 What's at stake Derek, Ruth and all you other assorted haters are trans human rights with public accommodations coverage.  The Chrissy Polis case demonstrably exposed the need for them.along with the Injustice at Every Turn Report.

And speaking of exposed, one of the lies the opponents told was busted

The transphobes alleged that since the Montgomery County, MD trans rights law was passed in 2007 there have been four rapes committed by crossdressed men lying in wait for their victims in ladies restrooms.

Montgomery County Chief of Police J. Thomas Manger sent a letter to Baltimore County Councilmember Tom Quirk, the sponsor of the proposed legislation stating that since the November 13, 2007 passage of the law there have been ZERO sexual assaults of the kind they allege.

Next hearing is scheduled for February 14 with a vote scheduled on February 21.  Let's hope trans residents of Baltimore County get to feel the love next month from the County Council and get the human rights coverage they desperately need.
.