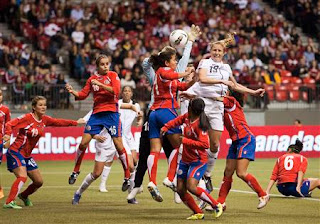 It was a London or bust game contested against with a team they had never lost to.

In this critical semifinal CONCACAF Olympic Qualifying match with a scrappy Costa Rica the two time defending Olympic champions had to work for their 3-0 win.

They were clinging to a 1-0 halftime lead courtesy of a Tobin Heath goal in the 16th minute and the Ticas had two solid scoring chances to tie the game in the 20th minute and the 27th minute.  One was saved by Hope Solo while the other clanged off the crossbar.

Costa Rica kept up the pressure in the second half and American fans in BC Place didn't get a chance to exhale until Carli Lloyd scored in the 72nd minute and Alex Morgan did so in the 89th minute to clinch their spot in London.

They'll meet Canada in the tournament final who clinched their spot in the Olympics with a 3-1 victory over Mexico in the other semifinal. .