'Work It' Doesn't Work So Far For ABC 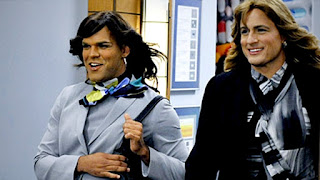 The trans community and our allies have been telling ABC that their proposed Work It show was problematic and didn't work for us.

I've posted about it while others tried to explain what the problems were with this show along with GLAAD and a long list of trans community bloggers and advocates.

The trans community expressed its opinions in social media how and why the show was disrespectful to our lives, our lived experiences and our struggles.

Obviously you knew better ABC since you've done so much groundbreaking programming that positively talks about our lives and had positive trans characters on other shows such as Alexis Meade on Ugly Betty.

The verdict is in about the decision to air the universally panned Work It.  According to Adweek it's getting worse numbers than the show it replaced, Man Up!

Work It debuted Tuesday night with a 2.0 in the 18-49 demographic they were shooting for, which is worse than the 2.4 that Man Up! had in the same time slot.  It's lead in show, Tim Allen's Last Man Standing averaged a 2.4 Nielsen overnight rating in its first broadcast episode since December 13.

Translation:  Work It lost 17 percent of its lead in audience.

(Snicker snicker)  Did ABC, the producers or the executives who made this programming call actually think this transphobic ripoff of Bosom Buddies would get an audience after the trans community warned you months ago to revamp it or not air it period?

Did you not believe or arrogantly thought the United States trans community didn't have cis allies who would boycott the show in solidarity with us or presume that the bad publicity this steaming pile of fail garnered would translate into ratings?

The proof is in the anemic Nielsen ratings and the piss poor reviews as to which point of view is carrying the day.