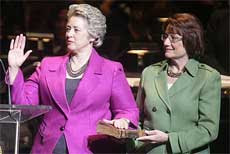 On January 3 Mayor Annise Parker was sworn in for her second term as Houston's mayor.

While I'm happy for her, I was majorly disappointed that Councilmember Jolanda Jones will not be fighting for us on city council after being defeated in the runoff election last month by Jack Christie while attempting to be reelected for her third and final term.

Here's the link to Mayor Parker's speech, and if I find the video for her speech I'll post that later.