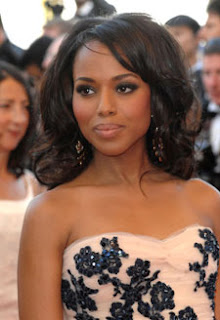 I love actress Kerry Washington, and had fun watching her thoughtfully eviscerate conservafools in various debates in the runup to that historic 2008 election as a Obama supporter.

My respect level for her went up to stratospheric levels when in an interview she gave while promoting the movie Life Is Hot In Cracktown in which she played transwoman Marybeth she made this thought provoking point. 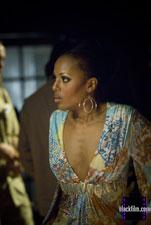 Because, really, what a trans woman is, is somebody who is a woman but whose biology has betrayed them in someway. For me, I take for granted my identity as a woman. I take for granted my anatomy and physiology. I don't really think about those things. What if actually I was born with my body betraying me in some way? I would think about it differently. I go to the gym four times a week to get rid of my ass but what if instead I was paying thousands of dollars on the black market in hormone therapy to have an ass? [Laughs] I might walk differently, stand differently, dress differently -- I might think about celebrating my identity as a woman in a different way.

I also discovered that in the process of filming that movie, to more authentically play Marybeth, she hired Valerie Spencer as an advisor.   Valerie and I talked about that experience she had with Kerry when I finally had the pleasure of meeting her during the 2011 Out on the Hill Conference.

Well, today is Kerry's birthday and I wasn't letting it pass without giving her a TransGriot shout out