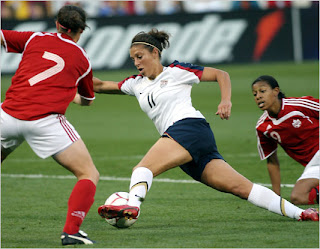 The only thing that was settled on Friday night were which two teams were going to represent CONCACAF in the upcoming Olympic women's soccer tournament.   There's still a little matter of determining who will win this 2012 Olympic Qualifying tournament

It's probably going to be just as tight in this one.   Team USA scored 34 goals in this tournament while Canada only gave up two while scoring 16.   Nine of them were courtesy of the tournament's leading scorer in Christine Sinclair.

Who said they didn't have anything to play for?  Team USA has never lost a match on Canadian soil, has played Canada five times north of the border and is 4-0-1.

The fun will be televised on NBC Sports Network starting at 7 PM CST and looking forward to an exciting a closely contested game.