Moni's Dry In H-town- For Now 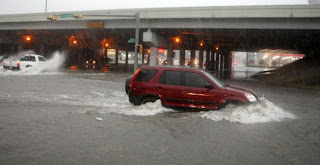 Had a strong line of storms push through the Houston area early this morning and drop some serious rain in parts of town, my side included.

It has caused some flash flooding in the usual spots around town plagued by it. We're bracing for another line of rain to come through the area while hoping the initial rainfall we received has a chance to drain off via the flooded bayous and get out of the area before the next wave hits..

For now I'm dry and obviously have power although my street is flooded and flood water is halfway up the driveway.

Will keep y'all posted

Posted by Monica Roberts at 1:05 PM