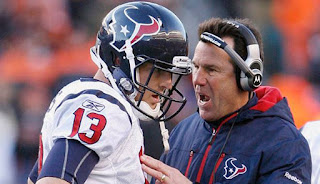 The excitement is building in H-town for the first ever playoff game in Texans history that will take place on Saturday afternoon at 3:30 PM against the Cincinnati Bengals.

It'll not only be the first NFL playoff game between two starting rookie quarterbacks assuming TJ Yates and Andy Dalton are both well enough to start, but the first one hosted by a Houston NFL franchise since the 12-4 AFC Central Division champion Oilers played a 1993 one next door in the Astrodome against the Kansas City Chiefs. 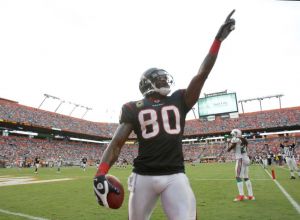 We Houston Texans fans hope this game has a much happier ending than that one did 18 years ago when Joe Montana had one last playoff comeback in his Hall of Fame bag of tricks and marched 90 yards through Buddy Ryan's defense for the game winning TD and ruin probably the best chance the Oilers had since the Luv Ya Blue days of going to the Super Bowl.   .

Our AFC South Division Champs will have Andre Johnson back, which should help our youngling signal caller out immensely and our running game, since they won't be able to stack the box and dare TJ to throw on them.

I'll have my deep steel blue on and like every Texans fan in the Houston area will have the TV tuned into the playoff pigskin proceedings at Reliant Stadium.

If the Texans win, they get a January 15 return match up in the Divisional Round with the Baltimore Ravens.