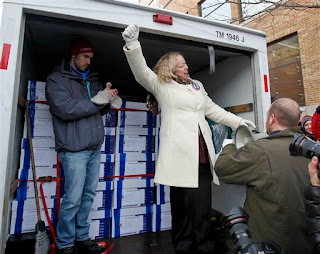 The number far exceeds the 540,208 signatures that were needed to force the election and is also just shy of the 1.12 million votes that Walker received in the 2010 midterm election.

United Wisconsin is also submitting petitions to force recall elections on Lt. Governor Rebecca Kleefisch (R) and exceeded the threshold needed by 305,000 signatures on that one.

Recall petitions were also delivered to force four more Wisconsin Republican state senators to face the voters, including majority leader Scott Fitzgerald, and United Wisconsin exceeded the number of signatures required on all four of those petitions as well.

The 1 million signatures gathered by United Wisconsin means that in order for the pro-Walker forces to stop the recall election, they would have to successfully invalidate 46% of the gathered signatures.

Not likely and even Scott Walker knows that.   That's why he's been furiously fundraising out of state, running ads and lying spinning his jacked up record to keep his seat and the money from his 1% buddies is flowing into his campaign coffers.

Stay turned, going to be a fun 2012 election season out of Wisconsin.
.