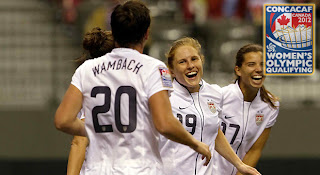 It really doesn't matter that so far the FIFA world number ranked Team USA won its group in dominating fashion, outscored its opponents 31-0, have never lost a match in a domed stadium, on Canadian soil or is 7-0-0 against Costa Rica.

All that matters is that 7 PM CST semifinal match they are playing in a few hours against Group A runner up Costa Rica.

It's simple.  Win the match and you're going to London.   Lose and like the FIFA number 2 ranked Germans you'll be watching the Olympic women's tournament go on without you in a few months.

In Team USA's case their chance to threepeat as Olympic champions dies with an upset loss.

No pressure.   But as ESPN's NFL analyst Herman Edwards famously said, that why you play the games.  And when you do, the unthinkable can happen like the Ticas catching the USA on a bad day, beating them and going to the Olympics at our expense.

They already had that nightmare scenario play out during FIFA Women's World Cup qualifying two years ago when Mexico upset them in the semifinals.  They still had a chance to qualify via the two leg playoff against Italy and did so.

In this Olympic tournament scenario there is no last ditch chance to qualify.  It's either win tonight or you'll be sitting at home this July.

In the other pressure packed semifinal matchup host nation and FIFA seventh ranked Canada takes on Mexico for the other CONCACAF Olympic berth.

Team USA is determined to make sure the upset for the ages doesn't happen and they end that semifinal match in Vancouver with a win and one of the two CONCACAF Olympic berths in their possession.

We'll see what transpires on the BC Place Stadium turf in a few hours.