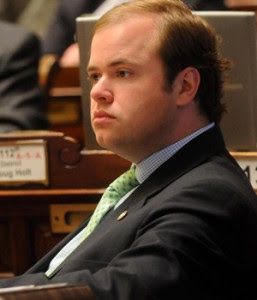 One of the other features of the GOP War on the Poor is to attempt to pass legislation that would force people to undergo drug testing before they can receive any public assistance.

In Georgia one of the six sponsors for Georgia House Bill 464, that state's version of that odious legislation is state Rep. John Andrew 'Kip' Smith (R-Columbus).

HB 464 if passed would force welfare recipients to submit to yearly random drug testing and anyone who failed the test would automatically be cut off from public assistance.


Turns out that Rep. Smith got busted in Buckhead for DUI after being pulled over by an Atlanta police officer for running a red light.   The officer smelled alcohol after pulling him over and after initial refusal by Smith to submit to the Intoxymeter test relented.

Blowing into it resulted in a .091 reading, which is above the .08 limit in Georgia.   To compound his problem Smith failed the 'walk and turn' and one legged stand field sobriety tests.

After failing those tests he was placed under arrest and taken to the ATL Iron Bar Motel.  He later failed two more tests in which he blew a .099 and then a subsequent .100 reading.

I love what Think Progress commenter Savethecountry had to say about what his punishment should be for his DUI arrest.

Here's an idea for Kip's punishment­. Instead of slapping him on his wrist by allowing him to complete some 30-day "Club Med" treatment program, let's make him live on what a typical Georgia welfare recipient receives, and let's make him do it for 30 days in Section 8 housing in a dilapidate­d, crime-ridd­en, economical­ly depressed neighborho­od with no car (entirely appropriat­e), an unscrupulo­us landlord and indifferen­t law enforcemen­t. Dr. Drew couldn't offer a better shock to ol' Kip's system than making him at long last walk the walk. Hey, we could get Morgan Spurlock to film it for posterity.

Extreme hubris should be rewarded with extreme humility.


Karma is a witch sometimes isn't it GOP?