The Road To London Is Starting In Houston 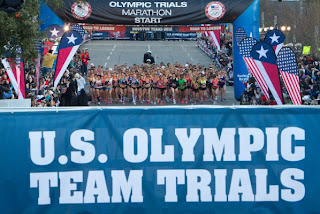 As you Olympic junkies like me already know the London Games will be contested from July 27-August 12.

The qualifying for the various international team sports and events has been going on, is happening or will be happening around the world over the next few months for the chance to become an Olympic champion.

The road for the 2012 US Olympic marathon contingent that will compete in London on August 5 and August 12 started in downtown Houston at 8:15 AM CST for the 113 men and women who hope to gain one of the six spots available.

We're running the Houston marathon this weekend, and as part of it we snagged the honor of hosting the 2012 US Olympic Team trials.  One of the cool things they are doing is the men's and women's marathons are being run at the same time. 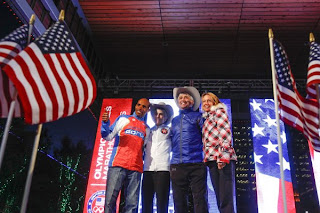 The marathon is one of the events that has been contested on the men's side in every modern Olympic games since the 1896 revival and is by tradition the last event that closes out Olympic competition.

The women's marathon is contested at the midpoint of an Olympiad.  It has a shorter history because of the decades long contentious battle to get it and any race longer than 1500m for women on the Olympic program.

The last Americans to win an Olympic marathon were Frank Shorter at the 1972 Munich Games.and on the women's side Joan Benoit in the inaugural women's marathon contested at the Los Angeles Games in 1984.

Since 1996 it's been predominately an East African party on the men's side with the Kenyans and Ethiopians dueling for supremacy with only the 1996 and 2004 golds eluding their grasp..

The temp right now folks as I compose this is 52 degrees (11 degrees C) with bright sunshine and little to no wind which is why we run the Houston Marathon in January.

Hey, it isn't Hades hot here all the time.   But back to the post.

They had an opening ceremony for it last night at Discovery Green complete with a fireworks display and appearances by Shorter and Benoit.  We'll also know which six people earned their ticket to London by running down the streets of Houston in a few hours.

TransGriot Update:  The 2012 US Olympic Marathon team is:on the men's side Meb Keflezighi, the winner and 2004 Olympic marathon silver medalist who ran a personal best 2:09:08 time. Pre-race favorite Ryan Hall was second in 2:09:30 and third was Abdi Abdirahman, who clocked a 2:09:47 and has run the 10,000 meters in the last three Olympics.

The US women going to London will be Shalane Flanagan, who in just her second marathon ran a personal best 2:25:38 to win and lowered by 3:05 her previous personal best time. Desi Davila was second in 2:25:55 and Kara Goucher third 2:26:06

Another good sign for the women is that the top four finishers all ran under the 2004 Olympic Trials record of  2:28:25 set by Colleen de Reuck.