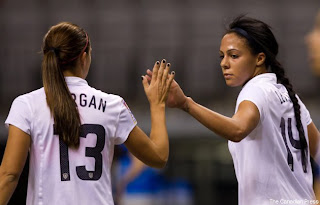 It was a good news, bad news kind of day for the FIFA number one ranked Team USA women as they prepared to play their second Group B match in the 2012 CONCAFAF Women's Olympic Qualifying Tournament in Vancouver.

The bad news is that Ali Krieger is out for the London Games with tears in her right MCL and ACL ligaments after a reckless tackle from Leonela Mojica sidelined her during the USA's 14-0 victory over the Dominican Republic.

The good news is we may have found Team USA's future striker in 21 year old Canadian born Sydney Leroux.

Leroux jogged on to the BC Place pitch as a second half sub to scattered boos from Canadian fans frustrated over her decision to play internationally for Team USA.

Leroux made the most of her homecoming as she scored five goals and helped Team USA clinch a trip to the semifinals of this 2012 edition of the CONCAFAF Women's Olympic Qualifying tournament with a 13-0 demolition of Guatemala. 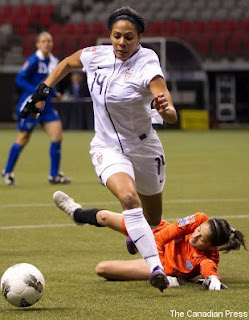 Unlike Friday's game against the Dominican Republic, it took Abby Wambach a little longer to score the opening goal in this match.

Wambach didn't do so until the 12th minute and followed it up with her second tally a mere three minutes later for a 2-0 USA lead. Ten minutes later Lauren Cheney scored to put the USA up 3-0 enroute to a 6-0 halftime lead.

Amy Rodriguez in the 29th minute, Carli Lloyd in the 33rd minute and Lori Lindsey in the 34th minute were the other first half goal scorers.

Vancouver born Leroux's five goals were scored in the 48th, 50th, 57th, 70th and 87th minutes with Megan Rapinoe adding one in the 75th and Alex Morgan in the 83rd minute.

The win clinched a trip to the qualifying tournament semifinals for Team USA, stretched their CONCAFAF Olympic qualifying record to 10-0-1 and also kept their remarkable streak alive of never losing a game on Canadian soil.  It also means they lock up the Group B title with a win or draw against Mexico on Tuesday thanks to a ginormous +27 goal differential.

FIFA number 21 ranked Mexico beat the Dominican Republic 7-0 to stay unbeaten in Group B and build their goal differential to +11.  It also sets up the much anticipated January 24 showdown between the two nations to determine who wins the group.

In Group A FIFA number 7 ranked Canada and Costa Rica have dominated with the host nation holding a +8 goal differential over Costa Rica's +4.

They will battle each other later tonight to determine who wins Group A with  Canada clinching if they win or draw.  The second place team has to play the Group B champ in the January 27 knockout round semifinals.
.
The surviving semifinal winners get the two CONCAFAF qualifying spots for the 2012 Olympic women's soccer tournament and play for the title on January 29.

Everybody else goes home and starts plotting and planning for the 2015 FIFA Women's World Cup Qualifying and the 2016 Olympics.