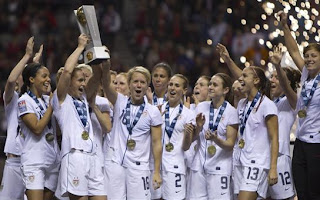 The highly anticipated showdown between the USA and Canada for the CONCACAF Olympic Qualifying tournament championship last night had a disappointing result for much of the record pro-Canadian sellout crowd of 25,427 at BC Place Stadium.

It was another dominating day at the office for Team USA, another USA win on Canadian soil and their third straight CONCACAF Olympic Qualifying tournament title with the 4-0 win.

It didn't take Team USA long to get on the scoreboard as Alex Morgan scored her first goal of the evening only four minutes into the first half.  Abby Wambach followed it up with a pair of goals in the 24th and 28th minutes to propel the FIFA number one ranked squad to a comfortable 3-0 halftime lead.  Morgan contributed another goal in the 56th minute as the USA kept up the pressure on their northern neighbors all night. 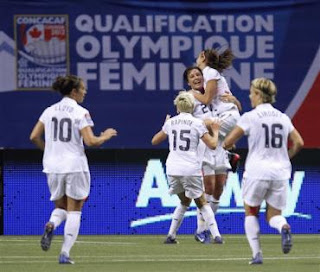 The win allowed the USA to complete this CONCACAF Olympic qualifying tournament without giving up a goal while blistering opposing nets 38 times in five matches.  It also increased their record to 5-0-1 in matches played against Canada on their side of the border.

Shoot, save some of that firepower for London.

Can't wait until the chase for the Olympic threepeat starts in July..