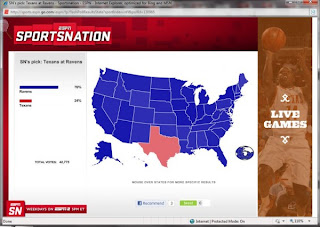 This ESPN Sportsnation graphic says it all about what the rest of the country thinks about the Houston Texans chances to beat the Baltimore Ravens in our NFL Divisional playoff round matchup tomorrow.at M&T Bank Stadium

They are 0-5 all time against the Ravens, are playing their first road playoff game in franchise history and lost to them during the regular season 29-14.

And oh yeah, the Ravens are 8-0 at home this season.

But as Herman Edwards famously said, that's why you play the games.

The Texans are getting pissed about the lack of national respect.   If I were the Ravens, I'd be very afraid about a talented team with a chip on its collective shoulders showing up at my place with something to prove.