'Work It' Ain't Working For The Puerto Rican Community Either 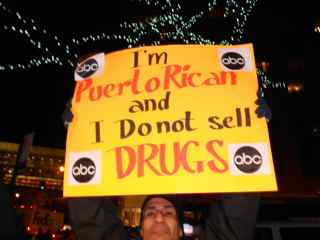 For those of you who have been keeping up with the latest news and views in the trans community as the 2k12 goes through week one of the 51 remaining in this year you are probably aware of the kerfluffle that has been building since May over the problematic show Work It.

It has garnered protests, pleas from transpeople and our allies to either rewrite, recast or cancel the show with those requests being ignored by ABC and the producers.

Maybe they should have listened to the trans community.

Thanks to perusing ENDAblog I have advised of another reason I can hate on the show besides the fact it's full of trans stereotypes and it sucks.  Can you say 'anti-Puerto Rican racism' people?   Thought you could..

Now ABC has another marginalized community on their azz about a replacement show that's getting negative reviews reams of negative publicity and a worse Nielsen rating than the canceled show it replaced.

And this latest controversy ain't gonna help those anemic ratings either.

ABC has two choices at this point.  They can either revamp Work It or put it out of its misery and cancel it.  Then again, it may be too late for Option A.