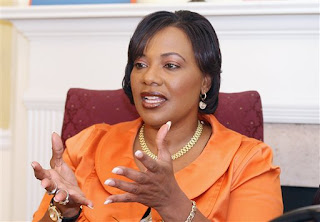 Like many African-American trans and SGL people I've been a vocal critic of Rev. Bernice King ever since Dr. King's baby girl made this foul 2004 statement:

“I know deep down in my sanctified soul that my father (Dr. King) did not take a bullet for same-sex marriage.”

She was also a co-organizer and participant in a December 11, 2004 anti-same gender marriage march in the ATL that started at the foot of her father's grave.at the King Center sponsored by Bishop Eddie Long's New Birth Missionary Baptist Church.

She was until last year an associate pastor and elder at New Birth until she left during the scandal to become the CEO of the King Center..

Now the GA Voice's Dyana Bagby is reporting that Rev. King made an eyebrow raising statement at a rally honoring Dr. King, Jr. in Atlanta that called for straight and TBLG people to come together to fulfill the legacy of her father.


It was reported that during Rev Bernice King’s sermon calling for unity, she said she didn’t care if people “were black or white,” she asked for “Hindu, Buddhist, Islamist” people to come together, people from the “North side or the South side,” and most surprisingly added the words “heterosexual or homosexual, or gay, lesbian, bisexual, transgender.”

Say what? Is it true she sounded more like her late mother Coretta than her cookie-chomping Aunt Alveda? 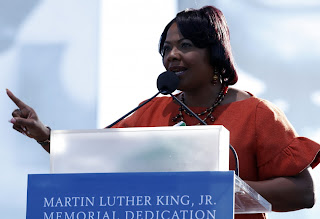 “We need all of us,” Rev. Maressa Pendermon, a minister with LGBT-inclusive Unity Fellowship Church, reported King as saying in the GA Voice article..

That we do.  If Rev. Bernice King has come to that epiphany, amen!   The proof will be Rev. King's deeds over the next few years.