2012 Team USA Women's Olympic Soccer Watch- On To The Semis 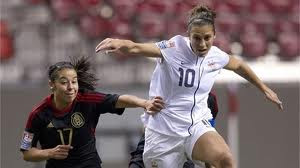 FIFA number one ranked Team USA went into this marquee soccer matchup against our southern neighbors with a lot on the line and much to prove.

In addition to keeping their hopes for an Olympic threepeat alive, they came into this match against Mexico with the Group B title on the line.

They also wanted to prove that Mexico's 2-1 upset win on November 10, 2010 in Cancun was just a bad day at the CONCACAF qualifying office.

They did so in convincing fashion as Carli Lloyd scored the first of her three goals in this crucial match in the 7th minute and Heather O'Reilly followed up with another one a minute later to stake the USA to a 2-0 halftime lead they never relinquished.

Any hope that Mexico had coming out of the locker room of getting back into the match died with Lloyd's second goal in the 57th minute that effectively sealed it.  She completed the hat trick in the 86th minute on a set piece play.

With the 4-0 win the USA clinched the Group B title while unapologetically piling up a +31 goal differential to do so.  They now reap the rewards of topping the group with a Friday semifinal matchup with FIFA number 41 ranked Group B runner up Costa Rica and a trip to London on the line.

The other semifinal at BC Place Stadium will feature the FIFA seventh ranked host Canadians and winners of Group A playing Mexico for the other CONCACAF Olympic berth.

The anti-climactic tournament final will be played on Sunday.

The USA women are now 11-0-1 in CONCACAF Olympic qualifying, 26-1-1 against Mexico, still has never lost a match on Canadian soil and are now 9-0-0 when playing in a domed stadium.

But the most important game and streak for Team USA to maintain right now is the one that happens in the semifinals Friday against Costa Rica.