Well, so much from the Canadian Senate returning to work on September 17 and getting busy passing Bill C-279.  Prime Minister Stephen Harper decided on August 19 to ask Governor-General David Johnston to prorogue Parliament, a request that was granted a few days later.

So what does that mean for us peeps south of the 49th parallel?   According to the Canadian Parliament’s website: “The principal effect of ending a session by prorogation is to end business. All government bills that have not received Royal Assent prior to prorogation cease to exist; committee activity also ceases. Thus, no committee can sit after a prorogation.”

Translation: Canadian MP's and Senators will not return to the business of legislating until after Canadian Thanksgiving on October 14. 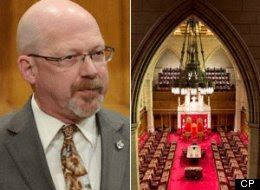 So what effect does that have on Bill C-279, which was at Third Reading stage in the Senate before the Conservatives slowed down the legislative works long enough for them to get out of Ottawa for their summer break without it getting passed?

It basically resets the process for it in the Senate (which was probably the intent of the Conservatives when they stalled its passage) at First Stage, so C-279 has to go though the entire legislative process in the Senate again.

MP Randall Garrison is still hopeful C-279 will pass the Senate and become law, but we'll have to wait until after Thanksgiving to find out if the Canadian Senate thinks the human rights of its trans citizens are worth protecting.
Posted by Monica Roberts at 2:00 PM