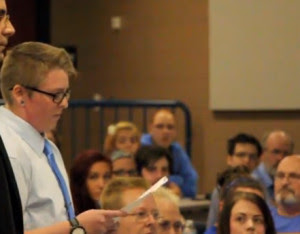 Well Class of 2014, I guess y'all were paying attention when I wrote this post.   Too bad the adults running many of your schools and school districts aren't.

While one trans student made history last week, another one won't even get the chance to become homecoming king at his school when they play their game on October 5.

The Richland School Board let stand a decision by school administrators in the Johnstown, PA area district to deny 17 year old senior Kasey Caron to chance to run for homecoming king.

It's similar to the battle earlier this year that Isaak Wolfe fought in his administratively thwarted attempt to become prom king at Red Lion High     Kasey is being listed on the ballot for homecoming queen instead of homecoming king.

Kasey's mother Kathy Caron read a prepared statement seeling to not only reverse that school decision, but also asked the Richland board to address three issues:
The board punted on the homecoming king issue and claimed they would need more time to study the other three.

“No formal action is required due to the board agreeing with the previous decision of the administration,” Richland School Board Solicitor Timothy Leventry said from a prepared statement.

Wondering if the ACLU is going to jump into this case.
Posted by Monica Roberts at 12:00 AM