4th Annual OUT on the Hill Starts Today

One of the events I'm sad I won't be able to make this year is the fourth annual NBJC OUT on the Hill conference that starts this morning and runs through September 22 at the Renaissance Washington DC Downtown Hotel.   And yep TransGriot readers, no Moni on the scene means no OUT on the Hill daily recap posts this year.

I'm bummed about that because this is not only the National Black Justice Coalition's 10th anniversary year, I'm also going to miss the 'Shades of Masculinity' transmasculine panel discussion scheduled to take place September 20 that features one of my fave trans men in Kylar Broadus and the Black LGBT Leaders Day at the White House.  In addition to the other events and presentations scheduled to take place, there's also a screening of the documentary film The New Black film to close out the event on Sunday.  .

Whenever I go to OUT on the Hill, it feels more like a family reunion than a conference.  I enjoyed talking to not only my NBJC family, but going to Washington DC to converse with Black TBLG leaders from around the country and writing up what transpired during the conference as the day wound down. When it was over, I felt inspired, empowered reinvigorated, and reenergized to return home and continue pushing the human rights of the Black TBLG community forward . 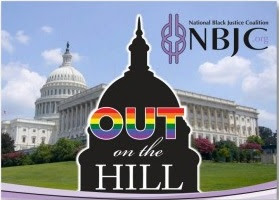 It sucks and I'm disappointed I won't be there.  But as much as I would like to be at every major event, sometimes things and life don't work out so you can be in the house for them.  Maybe next year Moni will be back inside I-495 for OUT on the Hill's bigger and better fifth edition.

Then again it'll give y'all a chance to miss me.

For those of you who are going to be in Washington DC for this year's fourth edition of OUT on the Hill, love y'all, have fun, handle your business and hope to see y'all next September.

And eat a few crabcakes for me.

Labels: NBJC, Out On The Hill