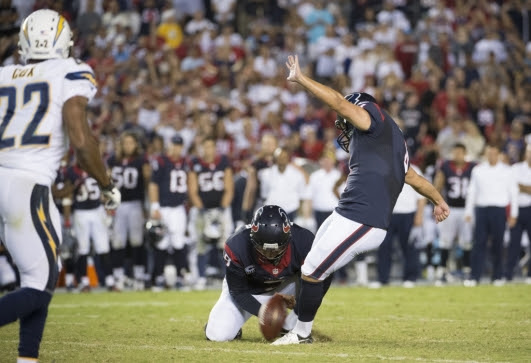 In an opening game that had me wanting to throw stuff at the television at times, I got to watch a little Texans history at the end

The Texans had a not so wonderful start to their 2013 NFL season in the Monday Night Football nightcap with Matt Schaub getting his initial pass of the season batted and intercepted deep in Texan territory and the Chargers quickly cashing it in for the opening touchdown.

The Texans trailed 21-7 at halftime and after the Chargers took the opening third quarter kickoff and rammed it down their throats for a 28-7 lead.

After that the Texans woke up and started playing football.  The Bulls on Parade shut down the Chargers offense for the rest of the game and Matt Schaub and company scored 24 unanswered points to orchestrate the biggest Texan comeback in their history.

I'd rather have less stress while watching my fave NFL ballers, but it was nice to see them claw, scratch and fight their way out of a self created hole and snatch victory from the jaws of defeat.

The Texans play their home opener at Reliant Station Sunday against the Tennessee Traitors.   Hopefully they won't be getting off to an abysmally slow start in that game and that is not a trend.