Was it just a mere seven months ago we were watching the Ravens knock off the San Francisco 49ers in Super Bowl XLVII to hoist the Lombardi Trophy?

The Ravens weren't the only peeps winning a championship for the 2012 NFL season.  The TransGriot also won her season long prognostication battle with Michael Watts on the last day and last game of the NFL season thanks to RGIII knocking off the Dallas Cowchips Cowboys.

So yep, it's that time again and Moni gets to defend her hard won championship now that the 2013 NFL season kicks off in a few hours with the defending champion Ravens in a rematch in Denver of their Divisional Round playoff game upset with the Broncos.

We have a new challenger joining the fun in Deep Thoughts blogger Eli Blake.

Both teams will have changed since January with the most glaring ones for the Ravens being not having Ed Reed, the retired Ray Lewis and Anquan Bolden on the sidelines.

And speaking of changes, my hometown NFL ballers are retooled and reloaded for another run at their third consecutive AFC South title and in the process hope to finally kick the playoff door down to their first AFC Championship game for a Houston pro football team since the 1980 Oilers did so. 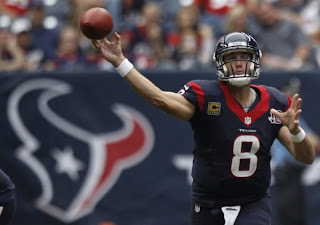 The Texans not only want to get to and win the AFC title game, but want to be playing in Super Bowl XLVIIII at Met Life Stadium on February 3.

The Texans will get their chance to show the nation in prime time how good the 2013 edition is when they play the San Diego Chargers and Matt Schaub will get another chance to prove he's an elite quarterback.

And we hope to see another appearance of the Bulls on Parade that lifted the Texans to an opening 11-1 record before they lost Brian Cushing for the season.

And need I remind 'errbody' (and especially you Arlington Cowchips fans) that the best defensive end in the NFL wears a Houston Texans uniform in one JJ Watt?

Rules are the same as they have been the last two years.  Mike, Eli  and I pick the winners of regular season games (no spread) with whoever having the best record after Week 17 getting bragging rights until the 2014 NFL season.   Team I'm picking to win the game is in underlined bold print.

Philadelphia at Washington
Houston at San Diego
Posted by Monica Roberts at 12:00 PM